I’m delighted once again to have picked up honours at the 2014 MATRIX Poetry Competition. This year I was runner up in Category One, open to people with a science/technology background, with my poem “Turing“. 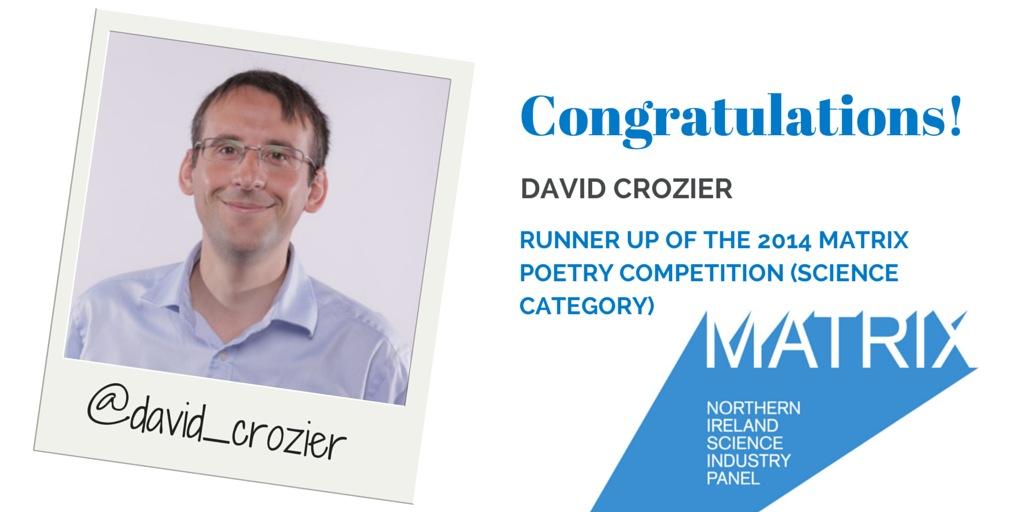 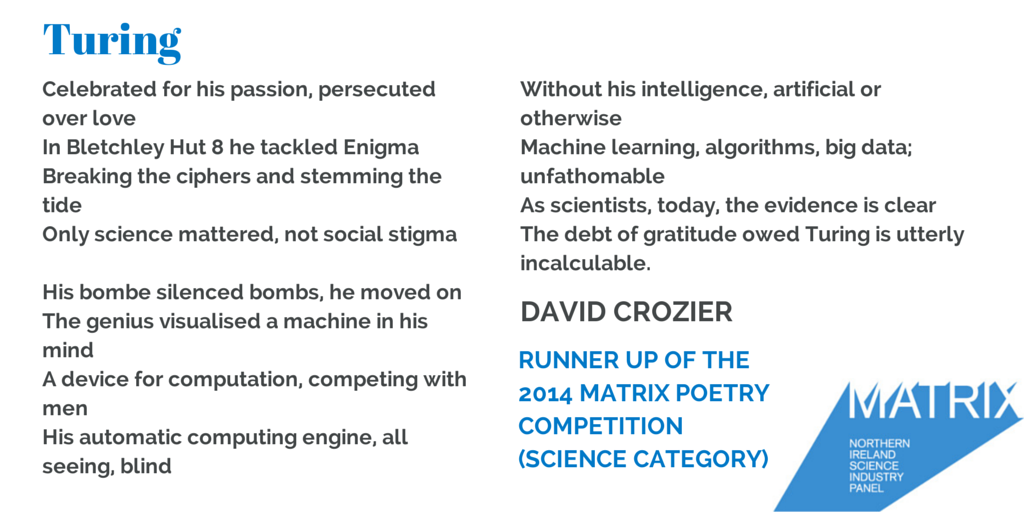 The competition was judged and award presented by respected poet and retired academic Professor Ignatius (Iggy) McGovern. The Award ceremony was followed by a reading from his new book, “A Mystic Dream of 4” which is a sonnet sequence based on the life and times of the Irish mathematician William Rowan Hamilton.

The winner in the category was my good friend Fabian Campbell-West, who I work alongside at QUB’s ECIT Institute and Centre for Secure Information Technologies (CSIT), with his poem “Computer Coder’s Sonnet“.

My poem has Alan Turing as its subject. Turing was a mathematician, wartime code-breaker and pioneer of computer science. His contribution to the war effort and technology were only recognized recently due to the secret nature of the work, his prosecution for homosexuality and untimely death by suicide at the age of 41.

Much of the research carried out within CSIT on areas such as cryptography, algorithms and artificial intelligence can be traced directly back to his ground-breaking work back in the 1930’s and 1940’s.

Once again here is my poem:

Celebrated for his passion, persecuted over love
In Bletchley Hut 8 he tackled Enigma
Breaking the ciphers and stemming the tide
Only science mattered, not social stigma

His bombe silenced bombs, he moved on
The genius visualised a machine in his mind
A device for computation, competing with men
His automatic computing engine, all seeing, blind

Without his intelligence, artificial or otherwise
Machine learning, algorithms, big data; unfathomable
As scientists, today, the evidence is clear
The debt of gratitude owed Turing is utterly incalculable.

Since writing the poem I have learned that a film called “The Imitation Game” based on Alan Turing’s life will go on general release in the UK on 14 November 2014. It stars Benedict Cumberbatch as Turing and is directed by Morten Tyldum with a screenplay by Graham Moore, based on the biography Alan Turing: The Enigma by Andrew Hodges. You can view a trailer here:

This site uses Akismet to reduce spam. Learn how your comment data is processed.